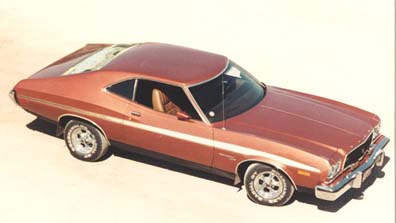 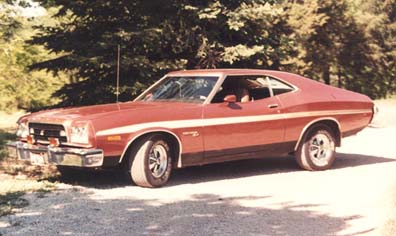 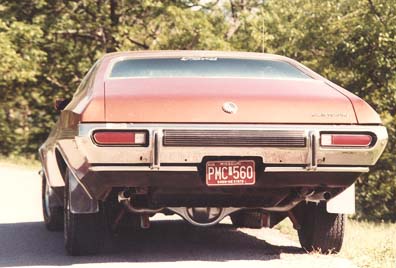 I received this from Eric R. Graef.  I thought it was so cool I left the whole thing. "I live in Blue Springs, Mo. just outside of Kansas City, Mo.  I bought my 73 Gran Torino Sport from my best friends brother for $1300 just after turning 15 in 1979. Had it a year before I could even drive it.  It was stock as far as I can remember. You can see that in the first picture I sent. I proceeded to replace the stock wheels, hubcaps and bias ply tires with mag wheels and radial tires. Painted the grill black and painted below the break in the body line with black undercoating. The first owner had lived on a gravel road and the lower paint was badly chipped. Kind of glad it was, made the car look much more thin I believe. That is how it looked in the second picture. Eventually added chrome mud-flaps and replace the rear wheel well chrome accent pieces. Painted the underside of the rear end black and the differential silver. Somewhere in there I had duel exhaust put on it. Of course replaced the stock radio with a Pioneer am/fm cassette. It came with a 400 engine, ps, pb, automatic trans. on the floor shifter, a/c (never worked for me), front bucket seats, consol, after-market tach. I added air shocks in the rear to raise the back end, the back end looked to low to me. Drove it all through hi-school, was the only one in town, very easy to find in parking lots. Had the engine overhauled around 100,000 for my graduation gift. Also had the transmission overhauled around the same time. I replaced the stock manifold with an Edelbrock aluminum one and the stock 2bbl carb. with a Holley 650 4bbl just after being overhauled. I took it to the strip once around that time with a buddy and it ran in the 14's I think. Nothing real great but it was a lot of fun. Drove it to college. Took my wife on our first date in it. Took many a long drive out to Lawrence Kansas (K.U.) to visit her at college. Let her borrow it for a semester or two while she was there. Had it when we got married in 86. We both drove it for years to work and around town. Had it when our first child was born in 93, finally after a second child was born in 95 the time had come to part. It had turned over the odometer again was in need of some serious floor board repair work, needed a new power steering pump and probably a new front end, tie-rod ends etc. We both wanted something we could depend on a little more, having little kids in the car. Didn't want to get stranded in the cold with little ones. So we put a picture in the local trading times and sold it for a $1000 dollars in about a week. I think I was 29 or 30 when we sold it. I had had that car for half my life at the time and all of my driving life. Watching it go was hard. Still wish I had it. A guy from Warrensburg Mo bought it and I haven't seen it since. Oh well, maybe when the kids are grown and I'm independently wealth I'll get another. Hope I didn't bore you to much. Let me know if you decide to use my picture on your website".  Eric I hope you do decide to get another, I know what it's like.