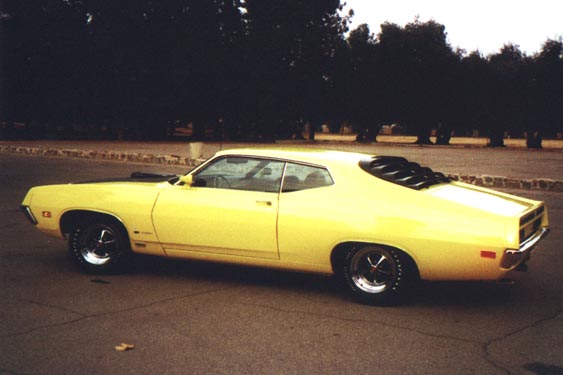 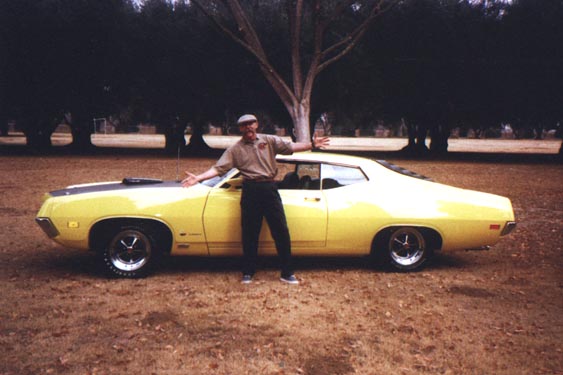 This car is a special car and owner.  The owner is a friend of mine Richard Markarian of Fresno, CA.  Richard's 1970 Torino Cobra was featured on the February 26, 2000 episode of "My Classic Car" on TV with Dennis Gage.  As a matter of fact that is Dennis Gage posing with Richard's car.  Richard bought this car in November of 1969, the price $4600.  Richard began a ground up restoration in 1990.  Every nut and screw was removed  and all parts were rebuilt or replaced.

This Cobra is one of the highest optioned Cobra's in the country and includes:

Richard sent me these pictures via US mail because as he puts it "Mike I would like to be on your site but I do not know how to send pictures.  I am new at this internet stuff".  With the pictures he wrote "Dear Mike,  I hope these pictures are OK for your site.  Dennis Gage is really a Ford man (I asked him).  We had a great time doing the show.  Stay in touch,  Richard".

Thank you Richard for the being a great guy and sending me the great pictures!  As a matter of fact Richard sent me 8X10's and now I get to frame them.  You can see more of Richards car and the episode at http://www.myclassiccar.com/episodes/006108/torino.html