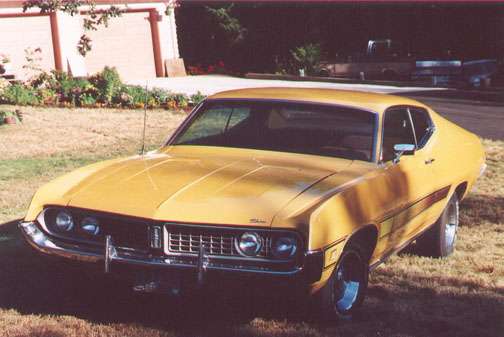 The following comes from Russ Gould of Silverton, Oregon.  Russ writes "Hello, I see you would like to add a picture of every Torino still on the road to your site, here is a picture of mine. I have attached a photo of my 1971 Torino 500 fastback. It is an original unrestored car even the paint and stripe are original. It has the 351c 2 barrel carb. and C-4 transmission. Thanks Russ Gould Silverton, Oregon"

Thanks Russ, I do want a picture of every Torino on the road, and yours is a beautiful example.  Reminds me a lot of my first car.  I thank you!!!

10-8-2002 - "Hello, you posted a picture of my 71 500 Fastback Torino on page 8 (2nd row from bottem) of your site. I just got back some new pictures of my Torino and they look a lot better than the one I sent you before. Also I thought I would share some of the history of this car.

My Uncle bought this car used in the late part of 1973. It was his family/daily driver, until 1978. He went to trade it in on a new car but the dealer ship would only give him a couple hundred dollars for it, so he gave it to his younger sister as a high school graduation gift in 1978. She kept it until she bought a little Honda around 1980. She then gave it back to my Uncle (her older brother) and it sat in storage until my brother bought it from my Uncle in the late part of 1980 or early 1981. In 1984 the breaks went out on the car, so it went into storage. My brother had a Jeep he used as his driver. On March 31st of 1984 my brother was on his way home in his Jeep when another car pulled out in front of him, the collision threw my brother out of the Jeep, and he passed away April 2 1984 he was 22 years old. The Torino was then giving to me. I was only 7 years old at the time, so the car stayed garaged until the Summer of 2001. My dad and I filled the car with fresh gas and much to our surprise if started up on the 2nd try. Soon after we had it towed to the local Ford shop for a break job and a much-needed tune up. Afterwards it was as good as new. Besides a small lift, some hoses and the front windshield and about half of the interior knobs are reproductions, the car is original and remains unrestored. This good 'ol' car has become a regular family member.