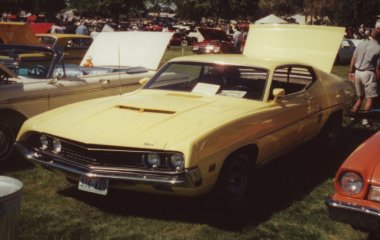 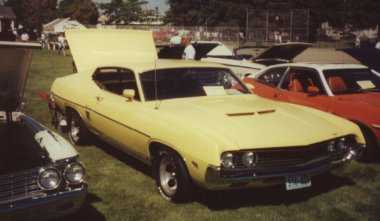 I received this email from Sean McDaniel of Spokane, Washington.  Sean writes "Hi Mike, your web site is looking great and thanks for all the hard work. I am sending you to pictures of my 1970 Torino GT 351C(finally....took me long enough). I just bought it this last May and have been waiting 15 years to get one. It isn't a Cobra( Cobra's are real hard to find up here in the pacific northwest)....but the next best thing. I won first place in the "Mustangs at the Midway" show here in my area earlier this year. These two pictures were taken from the "All Ford Show" a couple of weekends later. This is the only 70 Torino that has been in any of the 4 car shows I entered this last summer, people are always asking what it is or saying they really like it a lot, I think it is because it is not as common as mustangs, camaro's or other muscle cars that I get as many compliments as I do, also it is pretty flashy, on a bright summer day you can hardly look at it without being blinded. Cruising around town I have seen many a person get whiplash cranking there head around to get a look. This car is in very good condition, the interior looks almost brand new and exterior is in good shape. It will be getting new wheels this coming spring and some engine modifications...not that it needs them. I found the build sheet up under the dash and all the numbers matched but not sure if I want to keep it stock or not. I will send ya pictures of my little ongoing project. Thanks. Sean McDaniel Spokane, Washington"

Thanks Sean for the cool pictures, beautiful car.  Isn't it great having something that makes peoples head turn (the exorcist?).  Just kidding, great car!!!